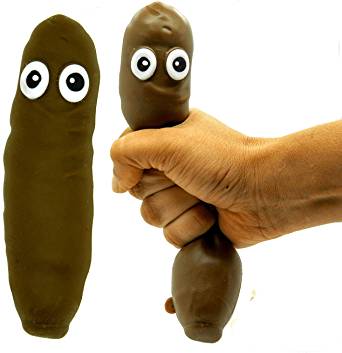 Christmas is coming, so ideas for presents? Unicorns are everywhere and pooping out shimmer slime, there’s stretchy poo to de-stress or hold your noses and look out for Farting Ninjas or Harry Plopper. Both of which can be neutralised with the posh ‘poo-pourri‘ or wiped up with another new contender in the bamboo loo paper market the equally posh ‘gono2.com‘.

Then there’s jewellery made out of Moose poop at ‘TirdyWorks.‘ This week in ‘The Daily Poo!’, as well as the usual round up of toilet and #2 news, here’s a tradition that’s well worth sharing! Having just returned from Barcelona I was reminded of ‘The Caganer‘ [The Pooper] which is a feature of the nativity scene you’ll only see in Cataluña. It’s a figure of a Catalan man wearing traditional Catalan clothes and squatting with his trousers around his ankles… and he’s pooing! This may seem strange, but the custom derives from the 18th Century. His poop is seen as a sign of good luck a healthy bowel movement. Not only is it a sign of a healthy body, but it can also help fertilize the fields and ensure a healthy crop. Why not add a Caganer to your nativity scene this Christmas and ‘spread the word, or spread the turd?!‘

Last but not least, as mentioned previously, we have patents pending on a perfect idea for your toilet, and improved posture, ease of pooping, health & wellbeing – it’s not a free-standing product either and it really blends in and is integrated in your WC to fit with your bathroom design. For the time being, if you want a functional Christmas gift for friends with poop problems there’s the ‘Squatty-Potty‘ or its posh competitor ‘The Essential Bathroom Footrest.’

We’ll do a PoopQuiz for Christmas, but next week, back to the serious (and fun) issues from ‘The Daily Poo!‘ and the goings on in the john.