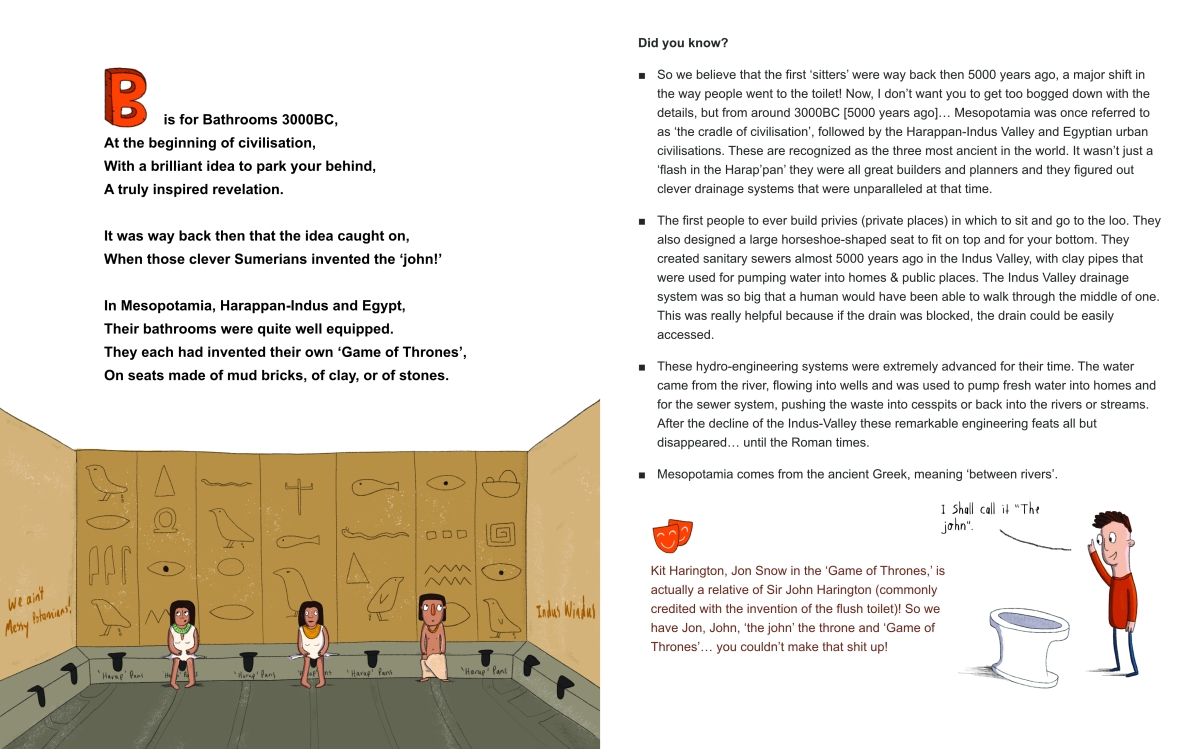 As per last week’s heads up on the bottoms down. We should point out from the very start, it’s a history that relates more to the west as sitters, than the east who predominantly squat (or other regions where people still squat) – as we all did once upon a time!

Nevertheless, with the exception of 25% of the world’s population who still have no access to basic sanitation, the evolution of the toilet [sit down, or squat versions + urinals for men] has been relatively slow – and as you’ll read, has also been relatively painful. The illustration above, from one of my books on the subject about, ‘The History of the Toilet’, shows that after the creation of humanity, all of who squatted – some bright spark designed and invented the first sit down toilets… Thousands of years ago in Mesopotamia first by the Sumerians, the Indus-Harappan, and Egyptian civilisations, then Greece, and a while later add Rome to the list – and so on and so forth, as many would have read at school. For example, the phrase ‘you got the wrong end of the stick‘ derived from the sponge on the stick that Romans used to wipe their bums, dip it in a bucket, and pass it on – I guess you’re now picturing that phrase somewhat differently!

Again, as in the illustration above, the first sit down toilet designs were a row of seats with horseshoe shaped holes, they were unisex, and the ablutions were washed away to the river, with their clever drainage/sewer systems, albeit they were polluting their rivers in the process. Bearing in mind how many thousands of years ago this was, a) there’s been relatively little progress, b) why there was no particular loo taboo then, how did that change, c) as it became obvious that bad sanitation and poor sewerage systems killed people – again, why such slow progress and, d) why no one ever asked the question about such a dramatic posture change, ‘so how does it affect the health of humanity to suddenly go from squat to sit?’ Guess what, same questions as above today, yet only some more definable progress in the last 180 odd years,… err wtf?

For example, Sir John Harrington is accredited with the first mechanical flushing system in 1596. But, to highlight the glacial pace, new design, development and infrastructure barely started to make an impact again for another 4000 years, way up until the mid 1800s when we learn that as a result of London’s ‘The Great Stink’ sewers and sanitation jumped up the ‘to do’ list, and around the same time the first septic tank was invented, and then Thomas Crapper became a marketing legend, which led to all sorts of tweaks to toilet and flush designs, aided by Alexander Cummings, Mr U or S Bend one might say. It was a bums rush of activity, infrastructure and invention!

As you can see, even with this brief insight – this is a big subject. After the mid 1800s progress lowed gain in real terms. For which reason this brief history is a two parter, no. 1 [this week] and no. 2 [next] explaining how the software (so to speak) evolved, as the hardware was introduced. Other inventors and ideas, and how we’re still struggling to cope to this day, and as mentioned at the start, at the same time neglecting 25% of the population who, quite honestly, are far worse off today than many people were all that time ago, over 5000 years earlier.

Until next week… and ‘The Daily Poo!‘ ‘A Potted History of the Toilet’ part 2.’

I have to start this week by mentioning a magazine I found called ‘Toilet Paper’ which may be familiar to many of you fashionistas – but, great design and wanted to flag it up as a fantastic coffee table mag or one for the bathroom! Let’s continue with a fun and educational youtube clip from Nas Daily from late 2018, you guessed it… about our specialist subject! Nas Daily’s ‘Before your next “toilet visit”… check this out‘ is another Jack Sim [Mr. Toilet] masterstroke. ‘The Daily Poo!’ this week, after blinding you with stats last week, is getting back to the down low on the down low and how to go.

A quick round up as the new year truly gets underway. Next week we’ll be examining the history of the toilet and the who’s who of loos. Let’s end on some environmental news… Bat Poop Gives Insight on Climate Change, Vegetation. Have a great week! 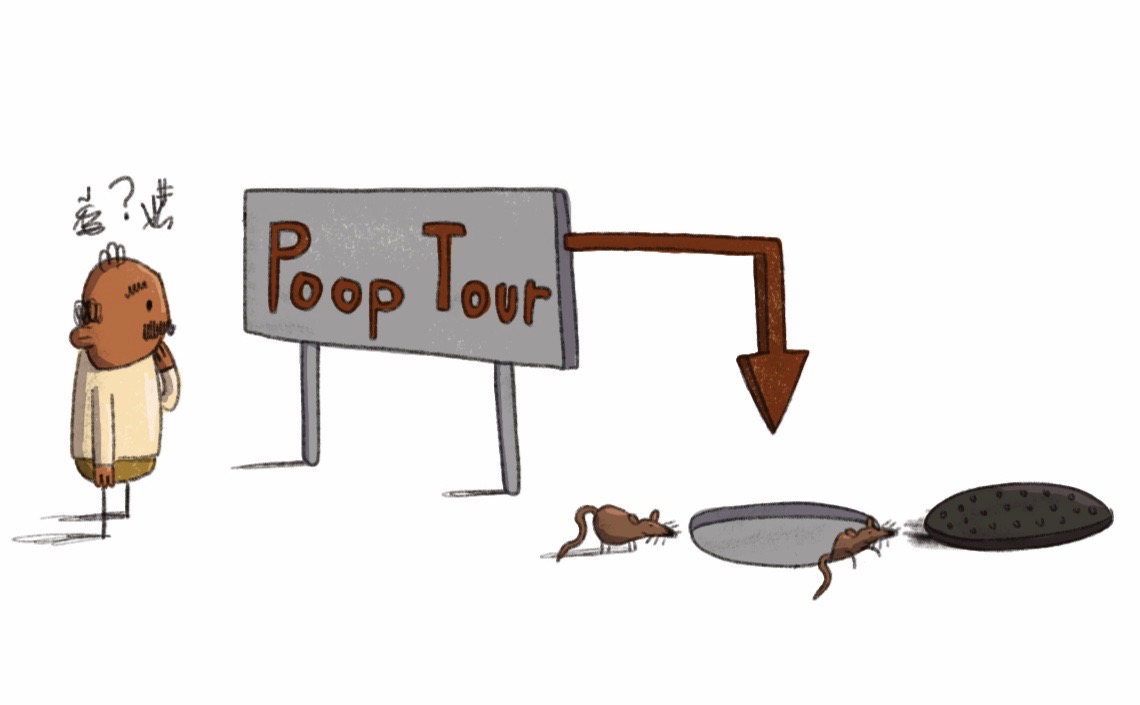 In last week’s edition of ‘The Daily Poo!’ we mentioned the global problems that remain a major issue for the people they impact, ie the sanitation and hygiene (or lack of it) in many areas of the world, along with lack of access to clean water or any water at all. There are many statistics bandied around, which can be somewhat confusing and blur the distinction between the various issues that need addressing, so let’s try and unravel the stats and give you a clearer picture on what’s really happening out there.

Key organisations in working to resolve the above problems include; The World Toilet Organisation set up by a guy called Jack Sim on November 19 2001 [also, World Toilet Day]. This is aligned to the United Nations who work closely with Jack on their sustainable development goals along with efforts to end open defecation. The World Health Organisation [WHO], UNICEF and The Bill Gates Foundation are other major influences, and the list is growing, as this rather ‘taboo’ subject dramatically affects both people, and the environment around the globe.

All of this data simply touches the surface on a problem that many of us neither experience, nor read much about. It is something that needs to be urgently addressed and the likes of Jack Sim and The World Toilet Organisation getting greater attention, media coverage and support.

Finally let’s end on a brief round up of other news from the world of loos and no. 2s from ‘The Daily Poo!‘ So, here are a few links to the most recent articles:

On which note… have a great week and we’ll catch up again with all the latest news and views from the loo in ‘The Daily Poo!’

In last week’s blog, we began to focus on a more global look at what’s happening to improve sanitation and better facilities around the world where not everyone has the luxury of a private, or clean public, toilet. Importantly this coincides with ‘World Toilet Day‘ which is tomorrow Tuesday 19th November 2019. Just to give you an idea of the proportions we’re talking about here are a few stats:

+ More than 80 per cent of wastewater resulting from human activities is discharged into rivers or sea without any pollution removal. [un.org]

The above are just a few of the challenges that are being addressed by individuals and organisations worldwide. ‘World Toilet Day’ was founded by Jack Sim [aka Mr. Toilet] back in 2011 and as mentioned in last week’s blog, he’s created such a movement (pun intended) that his work is not documented in a movie that’s just been released about him and his work, Mr Toilet: The World’s #2 Man

Apart from the UN, WHO and Unicef, the problem has the attention of; The Bill Gates Foundation, Unilever, WaterAid, EcoLoo, CleanIndia to name but a few. As described in the following article, the opportunity exists for an approach that makes it possible for businesses to do well – while doing good. Interestingly, major toilet manufacturers worldwide could join in and help educate and invest in this very idea themselves. The following article is from Nov 2018 ‘Tech Disruption Comes to Global Sanitation.‘

Finally, this week’s line up of fun & facts in the scoop on the poop…

Next week we’ll look at the latest in eco friendly toilet paper and also a few pointers on poop and your health in ‘The Daily Poo!’.